skip to main | skip to sidebar

It was my birthday this past week and I took the day off work (shocking!) to relax and have some fun out and about in the city...since I've been feeling a little cooped up doing nothing but moving and house sitting. After relaxing a bit in the morning I was taken out to lunch at Palisade's, which was a real treat with great food and a view of Elliot Bay.

Then it was off to downtown and the Pike Place Market: 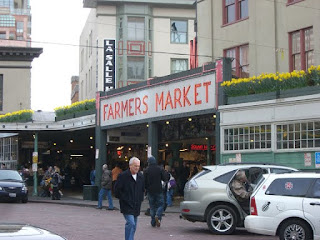 ...where I was treated to some beautiful birthday flowers. You can't do better than Pike Place Market flowers, they're the best: 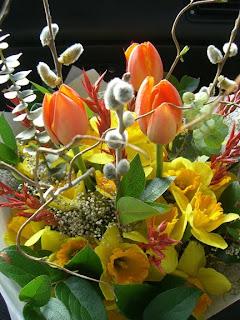 Wandered around a bit and even visited the gum wall. I was especially taken by these mutilated peeps: 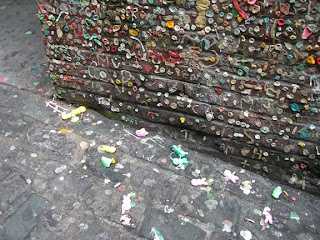 ...and this graffiti wall including some art by Henry: 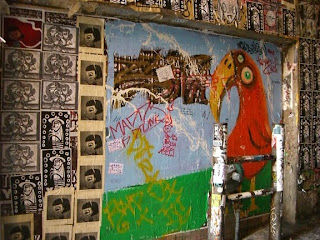 After a brief stop to walk and feed the dog it was off to dinner at one of my favorite french food locals, Gainsbourg: 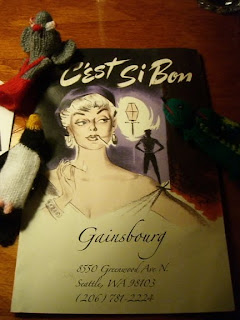 Where you can enjoy some yummy food and drinks while watching movies of Gainsbourg performing: 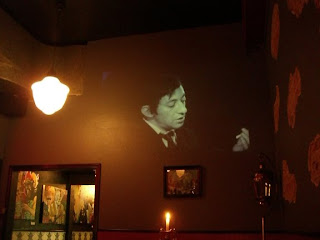 ...or other french movies. They obviously knew it was my birthday cause they played Amélie later that night. 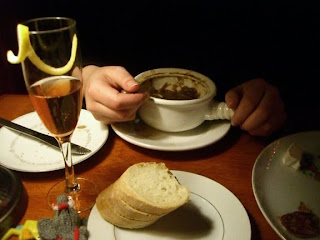 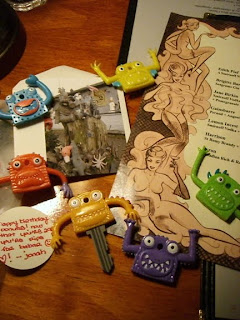 I think it was a good time had by all...especially the key monsters!
Posted by oonams at 18:18 1 comment:

Spring has sprung already in Seattle...we've got flowers blooming everywhere, and for a while now. I've been going on lots of walks recently and finally started carrying around my camera so I could capture some of the blooms: 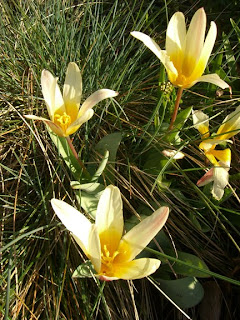 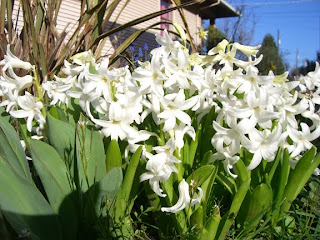 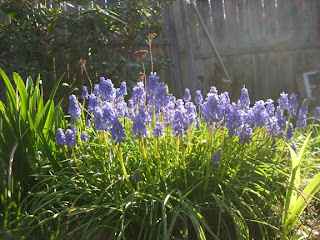 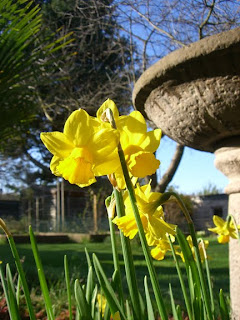 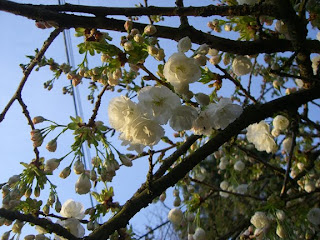 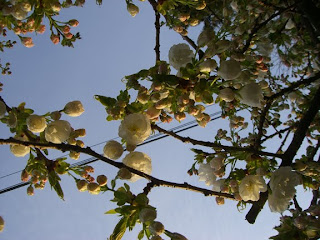 My dear friend Leah's blog post recently about youtube had me remembering some pretty memorable stuff I've been entertained with on that website...not so much about babies or funny home videos....

Most recently was the Shorecrest High School vs. Shorewood High School lip dub & continuous shot smack down. Shorecrest was first, putting together Outkast's song "Hey Ya" and what looks like the entire high school for our entertainment. And while Shoreline's work is indeed quite entertaining and an interesting tour of their school, the one thing that I came away with was a sad feeling because I noticed that it doesn't look like the students actually have real polaroids in their hands during that section of the song (although I could be wrong, but the shaking of the "polaroids" looked too flimsy and floppy for them to be real and looked instead like sheets of paper). This brought out the photo geek side of me who is so very very very sad that Polaroid went out of business. *tear* Some day soon kids will hear that song on the oldies station and be asking their parents, "What's a polaroid? You mean there were pictures that were made without a digital camera?!?! How would that even work?!?!?!"

Thankfully Shorewood took up the challenge and they created their own lip dub in retaliation. This one definitely got my attention, and I wasn't able to keep from gushing about it for a week. Made me proud that these schools are in Washington State, although we won't talk about why it had to be Shoreline schools rather than Seattle schools that came up with these great creative videos. Come on Seattle high schools!!! Get your butts moving and show Shoreline that you're the best!!! ahem, right...well..back to the lip dubs...all I'll say about Shorewood's work is that it was superb, and you have to also watch the making of. :)

Another fun youtube experience (that has nothing to do with high schools) is watching the stop motion greatness that is Tony vs. Paul. Pure wonderfulness! I could watch that every day all day!
Posted by oonams at 12:48 1 comment:

The best thing about my job...

...is the random presents and gifts we get from time to time from a client who was especially happy with the job we did and the extra mile we try to always go in completing a job.

Today's awesome gift basket that will be devoured at lunch (except for the mangoes which need to ripen more): 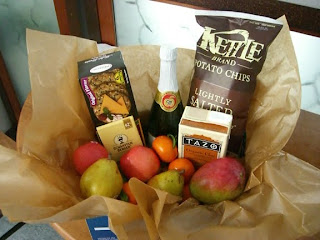 ...Feels more like 6 days....ok, so I never ended up posting any more from my trip to Europe over the summer. I'll try and get some pictures together from that and do an abbreviated roundup of the journey for whoever is still reading this (ahem, Dan).

In the mean time I will just apologize, once again, for my lameness. And this time I'm not going to make any promises about keeping up with this blog, because obviously that doesn't help...and instead will be plastering my computer with small yellow sticky notes reminding me to update my blog (photographic evidence to come). And Dan, thanks for the little kick in the butt comment :)

Getting back into the blogging spirit is going to take a bit of time I think, because I really have no idea what to write at the moment...however, I did find some fun pictures when I did a quick peak at what I've got in my photo archive that hasn't gotten any screen time. Plus, one of the pictures is quite relevant as it fits in with a fake holiday that's coming up soon...so enjoy! 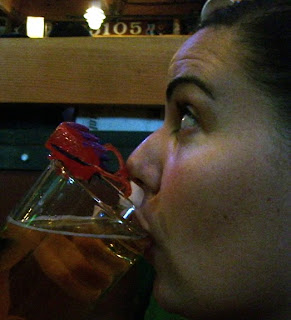 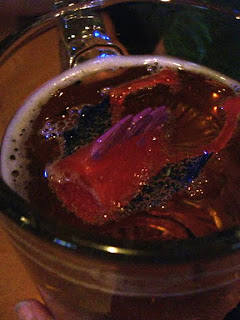 uh oh! someone had a bit too much fun... 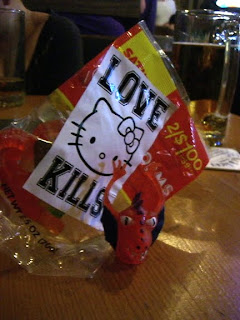 Ok, so I´ve been told that I need to update this blog...since we´re leaving Barcelona this morning for France and we don´t know what our internet access will be like the rest of this trip I thought I´d quickly write something up before scarfing down my breakfast and making a run to the train. Man, sorry for the run on sentences but this is going to be a non edited write up.

So, Barcelona has been a blast...Lisa and I can´t believe that our stay here is already over! We saw tons of neat Modernisme architecture and went to the Salvador Dali museum, which apart from the crowds was an amazing place! Highly recommend it! We also saw the black virgin statue at Montserrat Monastery and hiked around the mountain yesterday. We did TONS of people watching from our balcany overlooking the main tourist street, the Rambla and got to recognize all the local characters, from the homeless who sleep on the benches at knight to all the different street peformers.

And that´s just a little of what we´ve been doing and seeing.

I´ll try to update with another blog if I can...pictures will have to wait until I get home...sorry jj!!

Ok, so I know I'm been super lame about updating this blog recently. I'm trying to get myself back in the swing of things so I changed the look a bit, and here are some pictures I can share from a trip out to Bainbridge Island on the ferry earlier this winter. 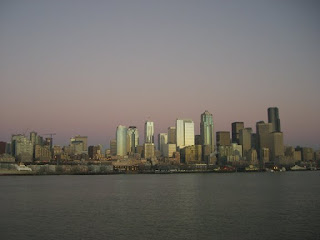 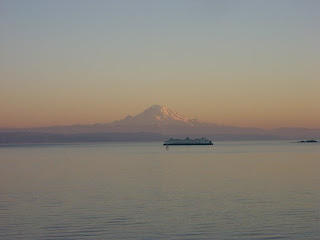 Mt. Rainier with ferry at sunset.
Posted by oonams at 15:15 No comments:

I was reading a french photo blog one day, Zoum Zoum, and the blogger had images by Julien Benhamou up. Julien's symmetry portfolio is all about exploring the "perfection" of a symmetrical body or face. Since Craig and I needed a bit of a destresser at the end of this intense work week we decided to try and copy Julien's idea. So we went down to our imac, took some head shots and then Craig did some flipping and flopping in photoshop to create new versions or our faces with perfect symmetry. So, can you tell which image below is the real me? 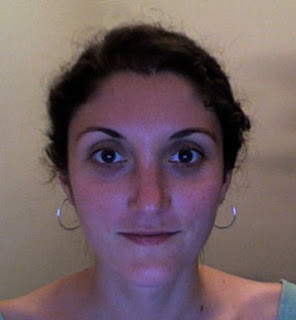 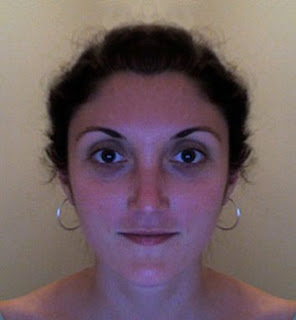 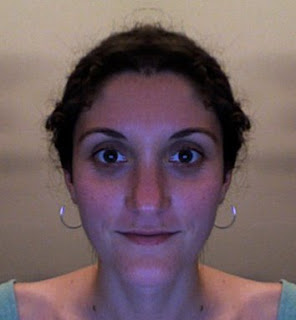 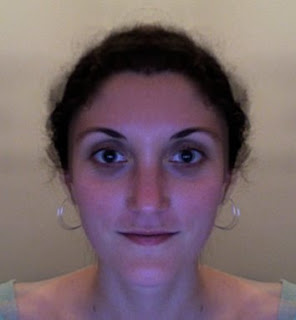 oonams
Ninjas, squirrels and randomness are what make the world go round.